... I've decided to transfer this blog towards another platform, so if you enjoyed reading my posts, please feel free to follow me on there! When I create the new blog I'll put a link up to it on this post, so do check it out if you're interested because it would be nice to get started :)

Blogging about my newer found interest in names (I only begun to become interested in names in around 2013) has been a fascinating experience, as I've been able to find out lots of information during my almost two years blogging here. I hope to continue this experience with the new blog, but I just got a bit de-motivated because of the inactivity here.

I hope that you can all understand, and, as mentioned above, I'll paste the link to the new blog here so you can follow it or just give me somewhere to get started afresh. Have a nice day/night!
Posted by The Weird, Wonderful and Great Names at 21:23 No comments:

Name of the week: Daisy 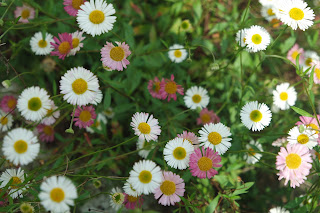 Credits: myself, please ask for permission if you wish to use
and don't forget to give me credits when you post! Thank you :)

As per usual, I apologise for my absence from this blog, I hadn't forgotten about it! School has been getting more hectic lately so I've had to prioritise that, unfortunately. I've actually been thinking about this blog a lot during the time I've gone, though. I'm starting to feel that this platform is very inactive and I'm not getting as much reception on here, which is starting to make me lose motivation. I still want to blog about names, don't get me wrong, it's just this particular platform that's making me less creative with posting ideas. I'm debating now about whether I should continue with this platform and just give this blog a bit of a makeover, or move over to a new blogging site and start fresh on there. We'll see.

But for now, I'm going to blog about a new idea I've had, where I'll talk about a name that has been the name that has caught my attention the most over the week. :)

Daisy
As the title suggests, the first name of the week is Daisy. Daisy has been on my list for a few years now, though over this week, it has particularly caught my attention. I think it's a very pretty name, though not too sweet as I feel that it's versatile on all ages.

Daisy is of English origins and is the word for the flower, which itself is derived from the Old English word, dægeseage, which has a meaning of "day's eye". It only started to be used as a given name in the nineteenth century, however in England and Wales, Daisy ranked at #24 in the popularity charts in 2014, though in the United States, it had a ranking of #183 in the charts a year later.

For me, when I hear Daisy, I imagine her to have a sweet but shy personality, though when she wants to she can be quite lively. Daisy is more creative and enjoys art and music at school. She loves photography in her spare time, and will travel with her friends to take photos. Due to this, she has a love for nature and is more of an outdoors than indoors person. Daisy is also a loyal friend and is also someone whom you can trust, as she is very considerate and isn't a gossipy sort; though if she feels that something needs to be said about a particular person who has perhaps done something wrong in her eyes, she will speak up.

Daisy also, aside from the flower, makes me think of spring and shades of pale pinks and yellow. I imagine pretty spring meadows when I hear the name Daisy.

What are your thoughts on the name Daisy? What type of person do you imagine Daisy to be like?
Posted by The Weird, Wonderful and Great Names at 23:44 No comments:

If you wish to ask me a question, suggest a new post idea, or use a photo I've personally taken, you can email me at theweirdwonderfulandgreatnames@gmail.com and I'll be happy to assist you! :)